In an environment where prices are ever increasing, you can see that the supply and demand equilibrium has been disrupted. One obvious industry that has felt this disruption is the vehicle industry.

Before digging into review the various potential reasons, let’s get to the takeaway right away. The new acronym for this 30 second world on social media would be TL;DR (Too Long; Didn’t Read). Basically, if you were thinking about buying a new car, the process has changed. Instead of going to a dealership in the evening and walking out 4 hours later with a new car, you probably will need to order your car and then return weeks or months later to pick it up.

The green line in Figure 1 shows price inflation for new vehicles in the US.  A slow upward trajectory is a reasonable baseline assumption. As we wrote about in the past, the Federal Reserve tries to target 2% for overall inflation. Vehicles should generally follow that same path. However, look at the recent price inflation. At about the same time as vehicle inventories were decreasing below normal levels, price inflation began to soar.

This is not ordinary economic times. Normally, if the price increases, you expect the number of units sold to increase with it. After all, if businesses can sell products at higher prices, they would normally want to increase production to capture more of those higher prices. The opposite is happening now.

The red line in Figure 1 shows the auto inventory to sales ratio. In normal times, there might be 2-3 vehicles on the lot for every car sold. Now there are more cars being purchased than there are cars on the lot. Hence, buying a car that has not been shipped, not built, or not even scheduled to be built is becoming the new normal.

If ten people want to buy a car, but there is only one car, what does the car dealership try to do? They try to find the highest price that one of the ten buyers would be willing to buy it at. They need to maximize profit on each sale because there are not as many sales to profit on. In addition, if manufacturers had five different car models, they would choose to produce the highest profit models (i.e. luxury SUV/trucks). In this hypothetical example, if you are 1 of the 10 buyers, and you are looking for compact car you might be out of luck.

This is exactly what is happening in the current environment. Car companies are struggling to get the necessary parts (primarily semiconductors)1. Kelley Blue Book reported quarterly sales YTD through Q2 were down almost 18% compared to 2021 sales. 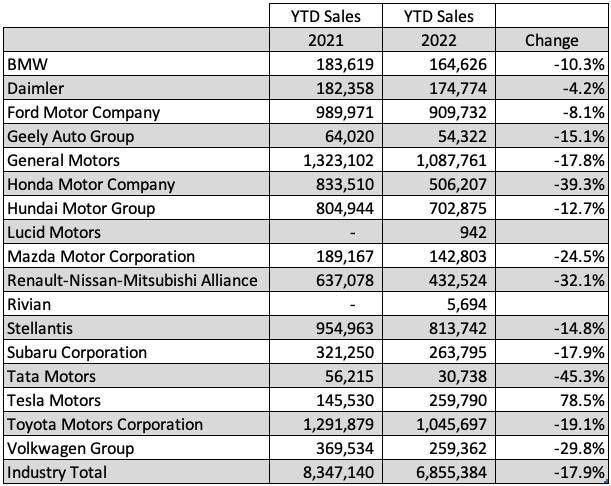 GM reported in Q2 earnings that they have over 90,000 vehicles in inventory that are waiting on semiconductor availability. To put this 90,000 in perspective, per the above chart, GM only sold over a little over 1 million vehicles through Q2. Not surprising, 75% of those 90,000 vehicles waiting on chips are SUV/trucks (Washington Post article showed great arial view of this.)

The used car market is directly affected by new car sales. With the new car supply issues, people are being incentivized to hang onto their existing vehicles. It is easier to fix the used car then it is to purchase a new car. This slowdown in vehicle turnover has created a corresponding supply issue for used cars. Reduced supply with stable demand has caused used car prices to rise too.

The adage that cars depreciate rapidly has suddenly been turned on its head. This is good news for current vehicle owners, but not so good news for people looking to enter the vehicle market for the first time or simply add a car to the family fleet. Cox Automotive recently published the following stats on average used vehicle prices highlighting this issue. Used car prices are up almost 40% in just 3 years.

Next Chapter in Vehicle Sales

The current increase in new and used car prices is unsustainable. Just like stock prices, vehicle prices cannot continue increasing at an increasing rate. A turning point in this vehicle supply/demand story will eventually arrive. As always, the trick is knowing when and how. Here are a couple of possible scenarios:

Regardless of which scenario or variation of multiple scenarios plays out, a thoughtful analysis should be completed before making your next vehicle purchase. Driving to the local car dealership expecting to drive home with the exact car model and make you want is probably not a realistic scenario currently.

1 Interestingly, the CHIPS and Science Act of 2022 was recently passed with the goal of helping the current and future semiconductor shortage. https://www.whitehouse.gov/briefing-room/statements-releases/2022/08/09/fact-sheet-chips-and-science-act-will-lower-costs-create-jobs-strengthen-supply-chains-and-counter-china/

2 Car manufactures incentivize car dealers to sell more cars as inventory builds and to keep in good standing with the manufacturers. These incentives are passed down to car buyers based on the current demand/supply environment.